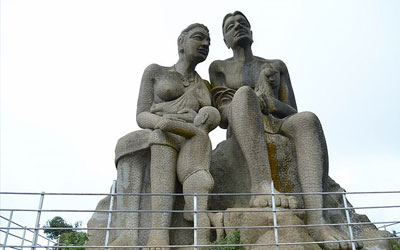 A hill station and hamlet in the Idukki district of Kerala, Ramakkalmedu is one of the most beautiful destinations in Kerala, which cannot be neglected while having a trip to the Gods Own Country. Ramakkalmedu is located in Karunapuram Panchayath, just 15 km east of Nedumkandam in Thekkady. Ramakkalmedu stands on the Western Ghats at an altitude around 3500 ft above the sea level.

The origin of the name 'Ramakkalmedu' is quite interesting. 'Rama-kal-medu' means 'Land of Rama's stone' or otherwise 'the land where Lord Rama kept his leg'. As per sources, one story is that this is the place where Rama kept his feet, while in search of his beloved wife Sita. As per Hindu epic "Ramayana' Sita was kidnapped by Ravana, the ruler of Lanka.

While reaching Ramakkalmedu, you can only find wind all around. The place is known to be the land of wind. You will feel that the wind will make you fly and it will be very difficult for you to stand still resisting the wind. Here the wind blows at a speed of 35 km/hour, which is said to be recorded as maximum in Asia. Blessed with this wind energy, Ramakkalmedu is the second place in Kerala, where you can find a wind energy farm with a capacity of 12.5 MW.

The first wind energy farm in Ramakkelmedu was inaugurated in the year 2008 by then Chief Minister of Kerala, V S Achuthanandan. The farm was set up with private participation and now you can find around seven wind farm units here. The sight of the massive wind mills is very exciting to the visitors. You will find yourself as a very small creature in front of this huge structure of wind mills. Be at the place on evening to experience the complete effect of the wind. You can go near the wind mill but you will not be allowed to enter inside.

ramakkelmedu hills in thekkadyRamakkelmedu is also famous for the statue of Kuravan and Kurathi. The statue is placed on the top of the Ramakkalmedu hills. C B Jinan is the architecture behind this beautiful statue, which was erected in 2005. From here you can have a panoramic view of villages and towns in Tamil Nadu like Theni, Cumbum, Kombe, Thevaram etc. It is not a tough job to reach on the top of the hills as you can use vehicles or if you want to walk that is also possible. But vehicles are not allowed to enter the statue premises. From here you can also sight the wind farm.

Best season to visit Ramakkalmedu is from September to May. Rainy season can be avoided. The destination is around 36 km from Kumily. You can hire a taxi from Kumily to reach this place. The nearest railway station is Chenganashery (90 km) and nearest airport is Madurai (145 km).